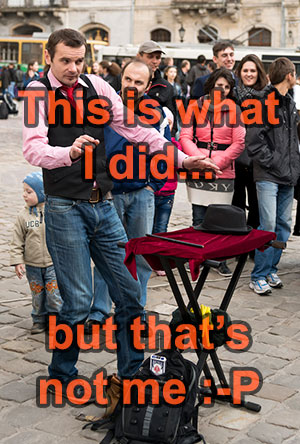 I promised a bit of an update about my magic exploits from the medieval event, Gulf Wars (SCA event) in March. So here is that update.

I had already been asked to do magic busking outside a merchant stall during Midnight Madness. That’s the one night during the week where the merchants stay open until – well – midnight :). That allows people to come out to the marketplace at night and create a sort of party atmosphere.

My plan was to set up my table and do periodic “shows” for passersby, gathering a crowd first. Then I’d put out the hat at the end.

It went alright. The big challenge for me was just to get out there and do it. It’s kinda terrifying:-P. But I did it. That was a win right there.

The main problem was that it was freezing – literally. It was a clear night in Mississippi, in spring. But it was 32 degrees all evening. That was NOT conducive to people standing still, outside, to watch a magic show.

The other problem was that I still have a lot to learn. The magic itself was good enough (more on my set later). But trying to get people to come over required me to shout and announce “magic show!” and other phrases to that effect. It almost never worked. What DID work was when people wandered by while I was ALREADY doing something for someone else (I often just started doing tricks either for nobody, or for 1 or 2 people, often friends). In my future busking exploits, I will try to get at least one “shill” to come out with me and be my starter audience.

The other problem I had was people leaving before my show was done. I’d read about this happening in the Gazzo book on busking – The Art of Krowd Keeping. But I couldn’t seem to manage to get people to stay without directly engaging and saying “don’t leave yet, you’ll miss the big finish.” That did work a few times. In addition to doing that, I tried shortening my show and/or going faster. It wasn’t until the next day that I remembered the advice from Krowd Keeping that said you need to NOT give into the temptation to speed up in response to people leaving. Next time.

The final challenge for me was the “hatting.” For buskers, putting out the hat at the end for tips is essential. At first, I just forgot to do it at all. When the shop proprietor reminded me, I started doing it. But I FELT BAD. I know how insane that is. I just provided entertainment for folks who were out in a marketplace! So it shouldn’t be too much to ask for a buck or three. But I felt so bad doing it. THIS, I need to work on for sure. But all in all, it was a positive experience. And I learned a lot.

This is a different kind of magic. You can’t rely on the amount of space you’re going to have at any given table. There is no performance pad (though I do have a little round neoprene pad for my chop cup routine). You don’t have a “servante” (a way to “lap” objects, as well as store props, etc.). So you are mostly doing magic that can be done standing up and without a table, ironically).

My table hopping was done at a “feast.” It’s sort of like doing a restaurant, but the courses are all served at the same time. There was only one feast during the week, so I only did this once. But it was good.

Why was it good? Well mostly it was due to the fact that I had a lot of friends in the crowd – something you’d almost never have in a restaurant or bar gig.

Basically I scouted tables where the people were waiting to be served or were between meals. I also wanted to make sure I didn’t interrupt people if they were all involved in an animated discussion or otherwise engaged. The perfect time to offer table-side magic is when the people are not actively eating AND they are in a sort of down time, ideally in those lulls that happen in conversations.

I would usually do one trick for a table and move on. I was trying like crazy not to interrupt their dinner. But the response was great. The kind of tricks I do for tables usually elicit screams of delight. So I had a great time.

What tricks did I do?

I said I’d tell you what tricks/sets I did for Gulf Wars. So here goes.

I wanted to do a mix of tricks involving different kinds of props. Here is what I came up with:

That set lasted about 15 minutes.

I could have done some coin tricks or some different card tricks. But like I said, each table was only getting one trick. So it didn’t matter if the next table got the same trick. Nobody was getting a repeat. This is one of the benefits of table-hopping.

If I had thought about it, I would have had someone take pictures. But alas, I forgot about that.

I hope this helps inspire others to get out and just do it!